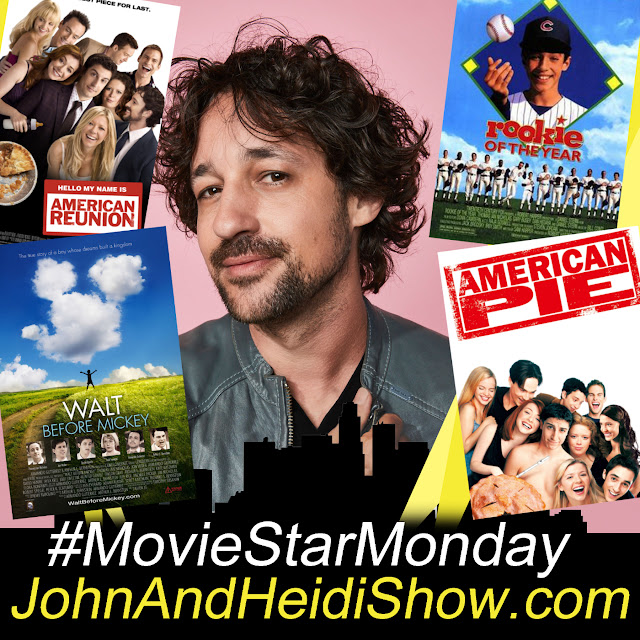 This #MovieStarMonday we visit with Thomas Ian Nicholas (Rookie of The Year, American Pie, Walt Before Mickey & Many More)

He put out a new movie last year ADVERSE (https://amzn.to/355PWBc)

And he's performing music at show all over the country https://www.tinicholas.com/music

Sure, a large vocabulary can make you seem – and feel — very intelligent, but according to a new survey, using too many big words can also be a turn-off. What’s more, 3 in 5 people actually use big words to sound smarter – even if they don’t know the meanings. In a poll of more than 1,900 people, commissioned by Preply, 56% said they assume that someone with a complex vocabulary is very smart. And nearly 4 in 5 (78%) agree that using big words makes someone seem even smarter than they are. Which words might make you seem smarter than you are? The survey found that words such as “articulate,” “accolade,” “brevity,” “anomaly,” and “adulation” all rank as terms that might give your IQ an apparent boost. Oh, one caveat: 43% of respondents assume that people who use overly complex language are just TRYING to sound smart, and wind up simply looking pretentious. And by the way, “caveat” finished 11th on the list of words that make you sound smart. Impressed?

Humans are slowly losing their sense of smell, according to a study. Olfactory receptors detect airborne chemicals that waft into our noses, but smell receptors vary immensely from one person to the next. The results of the new study of 1,000 people by the Shanghai Institute of Nutrition and Health support a long-standing hypothesis that human sense of smell may have degraded over time due to changes in the genes that encode our smell receptors.

When Channing Tatum hits the dance floor again for “Magic Mike’s Last Dance”, Matthew McConaughey might be joining him. Now that Tatum is busy working on the third Magic Mike movie, he’s teasing a return for McConaughey. The Oscar-winning star played ‘Dallas’, a mentor for Tatum’s ‘Mike Lane’, in the first Magic Mike, but missed the sequel, Magic Mike XXL.

Fox Entertainment has announced that the network has acquired all rights to ‘Gumby’, ‘Pokey’ and all their friends, from the estate of Joseph Clokey, whose father, Art, created the iconic claymation character in 1953. The acquisition includes the full library of existing Gumby animated shows, specials, movies and content, which currently air on Fox-owned Tubi. “The Gumby Show,” aired from 1955-68 and “Gumby’s Adventures” launched in 1988. “Gumby: The Movie” hit theaters in 1995. Fox says it has plans for “reimagining this beloved franchise for broadcast, streaming and beyond.”

A recent Reddit thread asked: “What do you really want to buy, but aren’t sure if it’s worth the money?” Here are some of the responses . . .

✗ “An air fryer. Everyone is telling me they’re fantastic, but I’d hate to buy one and only use it once or twice.”

✗ “A weighted blanket. Mine was a waste of money. I’m a side sleeper, and it gave me hip pain. Plus, it was just insufferably hot. It just wasn’t for me.”

✗ “Tattoo removal vs. just getting it covered up.”

✗ “A house. I’m single, it’s a terrible market, and all my friends talk about how they need to fix different parts of their homes. I don’t want to spend my life thinking about ways to fix it up.”

✗ “Business-class flights. I really like the idea but really can’t justify the cost!”

✗ “A college degree. Often experience is more valuable than the degree, but you can’t always get the experience without the degree. It’s a vicious cycle.”

This year, Apple will launch a record-breaking number of new products and now the company has accidentally revealed the first of them. According to “91Mobiles”, Apple has filed official model numbers for 2 new iPads and 3 versions of a new budget iPhone, and inadvertently leaked their prices. According to import data filed by Apple, the 3 new budget iPhones will be listed at US $300, a new iPad will go for $500-700, and the new iPads for $300.

In 8 out of 10 music genres studied, “love” is the most commonly-used word. The exceptions: rap and heavy metal.

It would take about 33 million people holding hands to span Earth at the equator.

Rabbits can see behind themselves without moving their head.

Hot dogs take more than 20 years to break down in landfills.

The world’s fastest roller coaster will soon take thrill seekers for a three-minute ride around a massive track while achieving unprecedented speeds of 155 miles per hour. Called Falcon’s Flight, the amusement ride is under development at the Six Flags Qiddiya in the Middle East, which is set to open in Saudi Arabia next year (2023). The roller coaster is planned to have a 2½ mile-long track that takes riders around curves, loops and a vertical cliff into a 525-foot deep valley. Six Flags Quiddiya will be home to 28 attractions — but Falcon’s Flight will be the centerpiece of the park.

A Hawaiian couple received a whopping $18,000 electric bill last month after their electric company claimed they were responsible for paying for their neighborhood streetlights. Desha-Ann and Rashann Kealoha received a letter from the Hawaiian Electric Company, saying they were the legal owners of the street and were therefore responsible for an outstanding balance of $17,860.09, which was currently more than $18,000 due to “several years of unpaid invoices”. The couple say this was the first time the’ve heard that they “own” the lights, and reached out to their realtor, who looked into the matter. A spokesperson for the electric company now says it does not expect the couple to pay the balance, but is working with the city of Waianaco to track down whoever should be responsible for paying the bill.

WORDS THAT GEN-XERS MADE POPULAR:

☞ Chill pill: What you tell someone to take when they are overreacting or stressed. (Needed more today than ever…)

☞ Headbanger: Someone who loves heavy metal, which was huge in the 80s.

☞ Yuppie: based on the acronym “young, urban professional”, it refers to an ambitious, and well-educated city-dweller who has a career and an affluent lifestyle.” (And a scarf around the popped collar of his Lacoste alligator shirt!)

☞ Diss: To insult someone, or treat them with well, disrespect. (‘Diss tracks’ came much later, though…)

☞ Hella: It can be an adverb meaning “very, extremely,” as in “that pizza is hella good”. It can also be an adjective, meaning “many, much,” as in “we ate hella pizza last night”. (So, it’s a hella-useful word!)

☞ Trippin’: Means you’re acting like a fool, you’re being too excited, or you’re too bothered about something. (What if you’re trippin’ on chill pills?)

☞ Rock: Of course, the word goes way back before the 80s, but it was the 80s when it started to be used then as a compliment. If someone says “you rock”, it means “you’re absolutely awesome.”

☞ To the max: Short for “to the maximum,” it means “completely” or “extremely.”

“That’s why New York is so great, though. Everyone you care about can despise you and you can still find a bagel so good, nothing else matters. Who needs love when you’ve got lox? They both stink, but only one tastes good.”