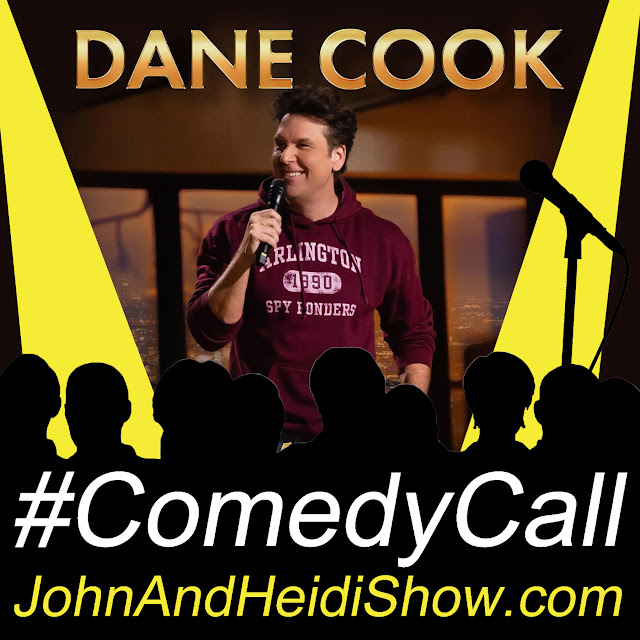 Today we have a #ComedyCall with Dane Cook!! His new stand-up special, “Above It All,” will be released through the social media platform Moment on Oct 5th. https://www.moment.co/danecook

There was a special premiere on October 4 during a special screening event at the TCL Chinese Theater in Hollywood.

Is it part of your nightly routine to help your kids with their homework? If so, you might want to rethink that. New US research says that if your children are able to tackle their homework alone, parents should put down the pencils and let their kids do the work. According to the study, it doesn’t matter if the parent has a high school diploma or a graduate degree, helping kids with their homework doesn’t help them learn effectively. In fact, your help may be doing the opposite. In the study, kids who had help actually showed cognitive loss — not remembering what they learned at school, adverse effects on home emotional climate (fighting with parents to complete homework), and deferred responsibility (not doing their work because they know mom or dad will do it for them). What can parents do to support their kids with their homework? Instead of “helping,” create a quiet place where they can work, have all necessary supplies on hand, and a designated time every day for them to do their homework.

A new, purple tomato is expected to hit grocery store shelves soon. The USDA has approved the genetically modified purple tomato, clearing the path for it to be sold in American stores next year. In addition to its unique color, the purple tomato also has more health benefits and a longer shelf life than garden variety red tomatoes, according to scientists. In fact, cancer-prone mice that ate them lived around 30% longer than those that ate normal tomatoes, according to a study.

Brad Pitt and Emily Ratajkowski have been out a few times together, according to sources, but are not officially dating. There has been speculation online that Pitt and Ratajkowski — who filed for divorce from her estranged husband, Sebastian Bear-McClard, earlier this month — have been “secretly dating.” But a Hollywood insider with knowledge of the situation told Page Six: “People have been speculating about this for a while. Brad is not dating anybody. They have been seen a couple times together.” The source notes that Pitt has also “been seen with other people” in recent months and that he is not dating anyone in particular. However, the movie insider cryptically added: “Stay tuned.”

Chris Rock doesn’t appear to be interested in hosting an awards show after the Oscars slap controversy. He has apparently turned down an offer to host the Golden Globes. And that’s not the first hosting gig he has said “no” to. In August, Rock said during a show in Phoenix that he turned down a chance to host the Oscars in 2023. According to Matt Belloni’s Puck Newsletter, Rock was offered a “ton” of money to host the Golden Globes. But, he reportedly passed on the offer, so producers “have moved on” in an effort to hire someone else. Rock has also shared that he turned down an offer to appear in a Super Bowl ad pertaining to the incident.

There’s a new favorite to be the next ‘James Bond’, now that it’s been explained exactly what producers are looking for. Last week, Barbara Broccoli said Daniel Craig had “cracked Bond open emotionally” and that same quality would be required of future 007s, as well as a 10-12 year commitment. That pretty much eliminates previous fav Idris Elba, due to his age. But according to the bookies, the clear favorite to become the next Bond is now…Henry Cavill, who has long been another popular choice among Bond fans to succeed Craig. Oddsmakers say Cavill’s next closest rival for the role is “Bridgerton “star Regé-Jean Page, with Tom Hardy and James Norton also listed as frontrunners.

Alec and Hilaria Baldwin just had their 7th child.

A lady spent 4 days in hospital after her Chihuahua defecated in her mouth as she was sleeping.

Fact of the Day: Mark Twain was born when Halley’s comet was visible; he died when it returned 75 years later.

Christian Bale says he had to “isolate” from Chris Rock on the “Amsterdam” set, saying: “He was so bloody funny I couldn’t act”.

When you exercise, the burned fat metabolizes to become carbon dioxide, water, and energy. That means you exhale the fat that you lose.

It would cost $18.3 million to make a replica Darth Vader suit.

Question: 35% of people claim they have never used THIS feature on their vehicle. What is it?

Yes, everyone was talking over the weekend about Elon Musk showing off his humanoid robot ‘Optimus’, but on Wed., Amazon unveiled a collection of product updates. The highlight is definitely a range of new features for ‘Astro’, its 20-pound dog-like robot with cartoon-y eyes on its tablet face. It uses voice-recognition software, cameras, artificial intelligence, mapping technology and face-recognition sensors as it zooms from room to room, capturing live video and learning your habits. Soon, it will be able to detect cats and dogs in the home, take short video clips of what they’re up to when owners aren’t around, and allow owners to watch and talk to them in real time. Amazon is also adding the ability to monitor if windows or doors are left open, building on what users have been already doing, such as checking to see if the stove was left on. Astro will also now work with Amazon’s smart-doorbell company, Ring, to provide security monitoring to businesses. Astro is currently available for $999, but pricing will later jump to $1,499.

We’ve all heard of job interview “red flags”. Recently, the BuzzFeed Community was asked to reveal their job interview GREEN flags — little hints that a job is going to treat you right…

✓ “A green flag for me is when the interview feels more like a conversation than a checklist of questions that could have ‘right’ or ‘wrong’ answers.

✓ “It’s a major green flag if the interviewer volunteers to give you a tour of the space. If it’s a great job, they’ll show you around and let it speak for itself…Plus, you’ll be able to get a feel for the environment.”

✓ “My favorite interview question is to ask how they managed and helped employees during the pandemic. If they struggle to answer or aren’t specific, then run.”

✓ “If you’re being interviewed by more than one person, how the interviewers interact with each other is so telling. If they genuinely seem to get on well, it’s probably a good environment.”

When a man opens a car door for his wife, it’s either a new car or a new wife.
Prince Philip, Duke of Edinburgh

Online hookup platform Tinder used National Dog Week to match dog rescues with potential owners. The dating app allowed users to attach a dog in need of a forever home to their profiles for the week, which ended on Saturday. That way, users were able to not only look for love — but for a furry friend as well. The company said it “wanted to bring members even more fun ways to find someone new, whether that be a new dog park pal or step-parent for their furry friend.” “Dog lover” is one of the most popular interests added to Tinder profiles.